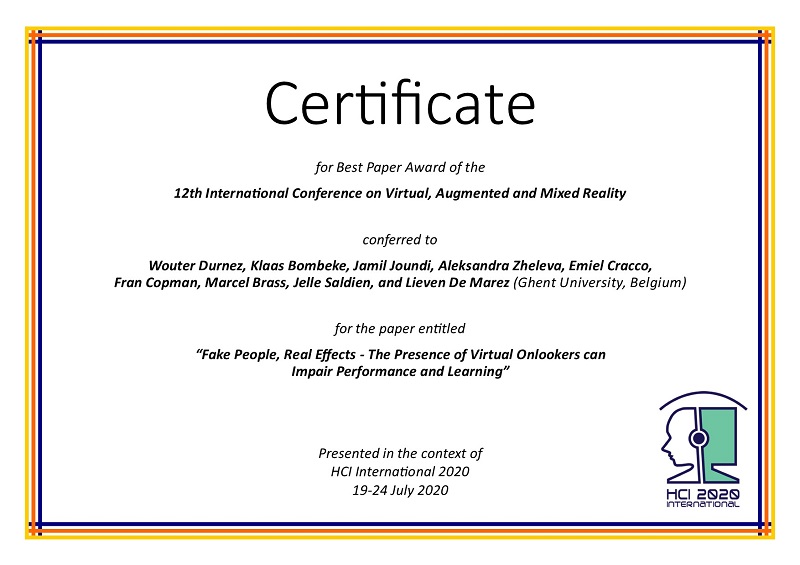 Certificate for Best Paper Award of the 12th International Conference on Virtual, Augmented and Mixed Reality 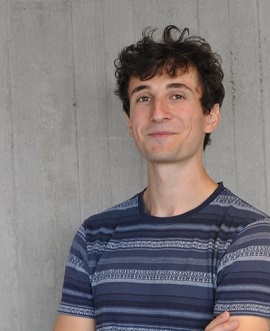 Paper Abstract
"Can effects of social influence be elicited in virtual contexts, and if so, under which conditions can they be observed? Answering these questions has theoretical merit, as the answers can help broaden our understanding of the interaction mechanisms described by social psychology. The increasing popularity of immersive media in training applications, however, has made these questions of practical significance. Virtual reality (VR), in particular, is a weapon of choice in designing training and education simulations, as it can be used to generate highly realistic characters and environments. As a consequence, it is key to understand under which circumstances virtual ‘others’ can facilitate or impede performance and – especially – learning. In this study, we investigated the impact of virtual onlookers on an adapted Serial Reaction Time (SRT) task that was presented in VR. In each trial, participants responded to a series of spherical stimuli by tapping them with handheld controllers when they lit up. Depending on the experiment block, the sequence order was either the permutation of a fixed order (and therefore predictable given the first stimulus), or fully random (and therefore unpredictable). Participants were divided into three groups (audience variable), depending on the environment in which the task was set: a group without onlookers (none condition), a group with a computer-generated audience (CGI condition), and a group being watched by a prerecorded audience (filmed condition). Results showed that the presence of a virtual audience can hamper both overall performance and learning, particularly when the audience appears more realistic. This study further reinforces the notion that the effects of social influence transcend the physical presence of others, but rather extend to virtual audiences."